In the first 6 months of 2015, 137,000 people crossed the Mediterranean Sea into Europe. The vast majority, according to UNHCR, were “fleeing from war, conflict or persecution.”

A third of those men, women and children who made it across the sea into Italy or Greece were from Syria.

The journey is not for the faint of heart. In April alone, 1,308 people drowned or went missing trying to cross the Mediterranean.

Many of those who originally fled to neighbouring Lebanon, Turkey and Jordan have decided to uproot themselves and their families once again, forced out of temporary refuge by the daily struggle to survive in countries overwhelmed and underfunded.

In a previous post I mentioned the Lebanese government’s response to the crisis. For all the mistakes that have been made, the lack of international support has compounded the situation.

(While there are some arguments to be made that the corruption and instability in the Lebanese government has made international organisations unwilling to work with them, it is by no means the full picture.)

International organisations have begged year on year for sufficient funds to deal with the crisis.  And year on year the funds donated and raised have fell far short of the target.

It’s little surprise that many choose to risk the journey rather than stay in a country whose politicians fail to act and whose aid agencies are being forced to cut back on already limited support.

But what they arrive to is the scenes we’ve all seen on TV. Terrified men, women and children arriving soaked on the shores of Greece and Italy to begin the long walk through Europe to seek asylum.

My friend Helena decided she needed to go and help. It was very in character. She finds it very difficult to stand by and be idle.

She didn’t just go on a whim, she researched for a few months, saved up some money and finally took the flight out to Greece to volunteer.

She’s set up a fantastic blog detailing her journey that I would urge everyone to read. She has a knack for getting to the heart of a situation – and getting people to open up and tell her their stories.

Things are so hectic over there that it was hard for her to find the time to sit down and answer some questions from me, and I’m very grateful she did so.

HELENA ON WHY SHE WENT

“I felt quite hopeless at home in Scotland.”

HELENA ON WHAT SHE EXPECTED

“I had no idea, there were no expectations.”

HELENA ON THE DAY TO DAY REALITIES

“You can expect to be on the go from first light, when the first boats arrive.”

HELENA ON WHAT MOMENT STICKS OUT

“I will never forget this man’s feet, he had no shoes or socks and his feet had clearly been wet for days.”

The foot of a refugee at the Moria camp. A centimetre of rippled, white skin after being wet for days.

HELENA ON HOW PEOPLE CAN HELP

“Open a dialogue with people.” 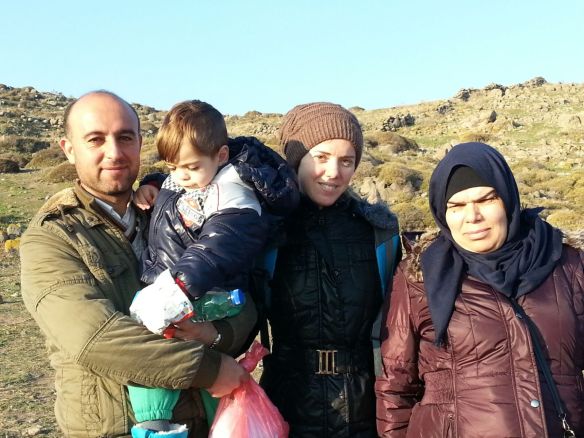 “This beautiful family are from Syria. They left Damascus about a week ago. They arrived here two days ago. Wee Hassan is just two years old. His father is Miteb and his mother Zuhoor which means flower in Arabic. The women in the scarf is Ateeyah, Miteb’s sister. They are heading to Germany.”

All pictures are from Helena’s own blog, which she kindly gave me permission to use.

3 thoughts on “Helena’s Story: A Scot in Lesbos”