Cut off from the rest of Lebanon and accessible by just one road is Arsal, the battle front with ISIS of which you’ve probably never heard.

Largely abandoned by the Lebanese state, the north eastern town on the border with Syria has had to absorb, at a low estimate, over 80,000 Syrian refugees into its population of just 35,000.

At the height of its security problems, when all other aid groups had pulled out over safety fears, it was a small, volunteer-run Scottish charity, Edinburgh Direct Aid (EDA) that was first on the scene.

Back from her most recent trip to the town, Maggie Tookey, EDA’s director of field operations, recalls being on its outskirts in August 2014, when ISIS and Nusra Front militants invaded.

Describing Arsal, she says: “There is nothing in the town. There is no police, there is no law, there are no Lebanese soldiers … you have it encircled by the army checkpoints. And outside that circle it’s a wild no man’s land where militants [from] ISIS and Nusra rule.”

When the invasion happened, it took five days for the Lebanese army to oust the militants, who lost over 50 fighters.

Nineteen servicemen were killed and 30 kidnapped, some subsequently released, others killed by ISIS and Nusra. At the start of December 2015, Nusra traded the last 16 it was holding in a prisoner exchange.

For the families of the nine servicemen still held by ISIS, the agonising wait continues.

Still unconfirmed, though estimates put the number above 40, are the civilian casualties from that battle.

Maggie, who was trapped outside the town for two days, finally entered to a “scene of devastation”.

Still visibly moved over a year later, she describes hearing shells exploding in the background as she tried to liaise with the Syrian team she works with, which was trapped inside Arsal.

In over a decade working in aid, including postings in Kashmir, Gaza and Sri Lanka, Maggie is no stranger to conflict or dangerous environments. But the scenes in the camps that day broke through her defences.

“The shelling in the camps was appalling … it had set fire to the camps and the people in the camps, if they didn’t get out straight away, had no chance,” she said.

“I remember standing in the still smouldering embers of those camps – 16 camps I think went up in in flames, and you can imagine, they’re so close together – and I remember speaking to one young father who was just standing there looking at the camp… he’d lost both his babies in the fire.”

The camps have since been rebuilt, but the tensions and problems that led to that frightening spill over of the Syrian conflict still remain.

Arsal is a microcosm of Lebanon – buckling under the strain of the refugee influx, little to no state apparatus and pinned in by extremists across the border.

Similar in size to Scotland, with a population of four million, Lebanon has taken in over a million Syrian refugees.

The Lebanese government have done very little to address this crisis, short of obfuscating the numbers. Since May 2015, on the government’s request, UNHCR has suspended its refugee registrations.

Couple this with active deregistration under new restrictive visa rules and the Syrian refugee population in Lebanon is likely closer to 1.5 million.

A generation of Syrian children has lost its access to education, living as refugees and at risk of succumbing to extremism.

A teacher for two decades before retiring in 1997, Maggie who has been working in Arsal to support informal Syrian schools, can’t stress enough the importance of education. 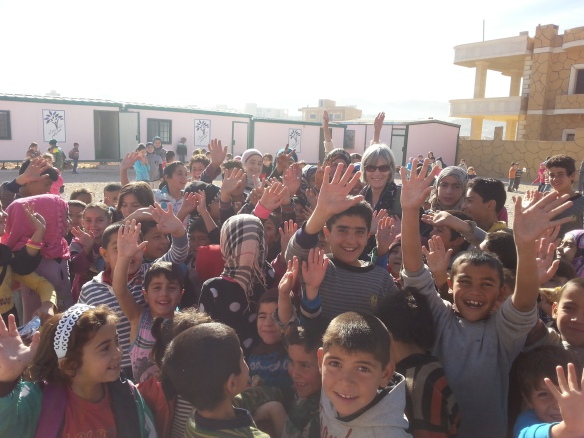 The most recent estimate by the Norwegian Refugee Council, she says, has the refugee population of Arsal at a staggering 130,000, of which 10,000 are children with no access to schooling.

As well as providing money and supplies to informal schools, EDA have also been offering vocational training schemes to young Syrians and Lebanese in the town, on skills such as computing, graphic design and motorbike maintainace.

Operating with a small budget, Maggie says the programmes have proved so popular they have a “massive waiting list of refugees.”

Children line by at the Al-Molham camp school in Arsal, Lebanon. Picture courtesy of Maggie Tookey

For her, programmes like the ones EDA are offering are vital in offering hope to young Syrian men at risk of joining groups like ISIS.

She sees Arsal as “a prison” for young men who can’t leave, can’t earn money and have no prospects.

“Of course all they have to do to get money, and shelter and a big gun – join Daesh (ISIS).”

She knows of some have turned to militant groups present in the camps, though she doesn’t believe they hold widespread support.

“I think the rest of the refugees just keep their heads down.”

Her latest trip – she returned to Edinburgh last week – brought home some of the risks she has been taking.

“I had to take a lot of precautions this time, I had to move every night to a different location to sleep and I travelled round in a car with blackened windows.”

When Maggie’s presence was spotted, she was moved to a secure Lebanese family home closer to the checkpoint before being pulled out of Arsal despite her own reluctance.

But despite the risks she has every intention of returning to continue EDA’s work early next year: “It’s a fine line between being foolhardy, which is an appalling thing to be, and trying to do the job you need to do.”

“We are doing some really great work up there, for such a tiny NGO we pack a punch.”